EPF returns on the slide

Difficult to sustain payouts above 5% in coming years

PETALING JAYA: Employees Provident Fund (EPF) contributors may have to be contented with lower returns in the coming years as the country’s biggest pension fund struggles to boost income amid steep falls in interest rates and a weak equity market.

Analysts said given the pension fund’s size and strict mandate, it would be very difficult to sustain payouts of above 5% in the coming years. 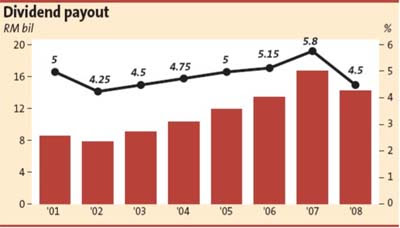 There were calls for a review from various parties demanding a higher payout, but some quarters said the pension fund had done well in safeguarding the nation’s retirement savings amid the current economic crisis.

The question now is how will EPF fare in 2009 and beyond?

Already the fund has warned that this year’s payout would be less than that for 2008.

Weak equity markets will continue to hurt EPF in the near term, but in the longer term, the fund’s performance will also be determined by the returns it gets from investing in low-risk assets such as government bonds.

The EPF had allocated a quarter of its RM342bil investment funds for higher yielding government papers. But as these higher yielding notes expire, the fund must purchase new issues which will now come with lower returns.

In comparison, MGS five-year notes yielded more than 5% a decade ago and above 7% during the 1997/98 Asian financial crisis.

Another big chunk of EPF holdings is in highly rated corporate bonds and low-risk guaranteed loans.

However, the global economic turmoil has cut the supply of new bonds coming into the market.

Cheaper lending rates had also reduced interest income from loans given out.

Investment in bonds and loans made up 40% of EPF’s total investments as at the end of last year.

Dwindling yields from these asset classes have been a drag on EPF’s income for the past couple of years.

That the EPF was able to fork out steady dividends of above 5% between 2004 and 2007 was mainly due to gains from investments in equities.

The collapse in global equities last year, however, had eroded the value of EPF’s shareholdings, forcing it to make a provision of RM4.69bil to account for the lower value of its shares, both domestically and abroad.

Also, the economic slowdown has dragged down corporate profits. This, in turn, has impaired their ability to pay out dividends to shareholders, further reducing the return on investments for EPF.

The EPF has stakes in more than 100 companies listed on Bursa Malaysia, as well as smaller stakes in a number of big listed firms overseas.

Just how bad EPF’s dividend payouts will be affected by the current market situation remains to be seen.

It is worth noting that under the law, EPF has to maintain a dividend rate of at least 2.5% annually. The dividend must come from income generated from its investments.

He said this was due to the prevailing global economic downturn but added that long-term recovery was certain.

“We believe asset growth of Islamic funds will be back to its strong level once the global economy improves,” he said at the Dow Jones Islamic Market Indexes media briefing yesterday.

According to The Banker, a global financing intelligence magazine, the top 500 Islamic financial institutions charted a 27.6% asset growth to US$639.1bil in 2008 compared with US$500.1bil the previous year.

For instance, she said, Malaysia’s takaful industry had doubled in asset size over the last five years and its penetration rate was expected to reach 20% by 2010, compared with 6.5% currently.

She added that Malaysia was the largest player with 20% share of the global takaful business worth US$4bil.

Chang also said that as at end-November 2008, there were 149 Islamic funds domicled and managed in Malaysia, compared with 131 in Saudi Arabia.

“This is despite Malaysia’s total Islamic assets under management being only US$4.64bil, compared with Saudi Arabia at US$13.9bil for the period under review,” she said.

As at April 2008, the total Islamic assets under management worldwide is believed to be US$33.9bil.

It is the first index in Malaysia that tracks returns of unit trust funds, acting as a barometer of equity unit trusts' performance here. OSK Investment Bank holds 49% of the joint venture, while iFAST Corp owns the remaining 51%.

Speaking at the launch yesterday, Fundsupermart.com Malaysia and Singapore general manager Wong Sui Jau said up until now investors commonly looked at other indices to monitor the status of the stock market.

"Although these indices mirror the overall situation of the market, they are not specifically designed to provide up-to-date information of unit trusts in Malaysia.

"The launch of FEFI is well-timed in these recessionary times. We welcome FEFI because it encourages investors to plan for the future and take charge of their investments," he said.

FEFI provides investors with a measurement of the aggregate performance of all unique equity funds available to investors on FSM (www.fundsupermart.com).

Wong said there were currently 44 equity funds on the index, and FSM intended to increase this progressively.

The index will be calculated on a daily basis, with the level and the corresponding date displayed on the website.

The website also features a three-month historical index levels, a one-year performance chart and a monthly update on index performance. FEFI is currently available in Singapore, Hong Kong and Malaysia.

Wong said unlike most equity market indices, it was not asset weighted, meaning that returns for a fund with smaller fund size would have the same impact on the index as another fund with a larger fund size.

"The index return thus reflects the mean return of the underlying funds on an equally-weighted basis," he said.

He said the index would be reviewed twice a year (on June 30 and Dec 31) to incorporate funds that had been newly added to the platform. On the selection criteria, he said the funds must be open ended and must have a daily net asset value available.

Wong also said FSM planned to launch a bond fund index within the next few months.

KUALA LUMPUR: Amanah Saham Malaysia (ASM) has announced an income distribution of 6.25 sen per unit for the financial year ending March 31, the lowest since the fund’s inception in 2000.

“The payment will benefit a total of 402,513 unitholders who subscribe to 7.21 billion ASM units,” he told a press conference yesterday.

PNB president and group chief executive Tan Sri Hamad Kama Piah Che Othman said that the fund had the capacity to declare an income distribution of 7.92 sen per unit, but the group decided to reserve the income for the next financial year.

“We feel that 6.25 sen per unit is already in line with the market at this condition,” he said.

He attributed the diminished performance to the global economic downturn and the fund’s 25% increase in the number of units in circulation that had resulted in dividend dilution.

“We are a long-term player; we are looking for opportunity to buy more shares (with good fundamentals and are reasonably priced) that are good for the long term,” he said, adding that PNB was looking to issue more new products this year. He said ASM currently had RM2.1bil in cash.

ASM is a fixed-priced equity-income fund aimed at providing unitholders with a long-term investment opportunity by generating regular and competitive returns through a diversified portfolio of investments.

Up to last Friday, ASM had recorded gross income of RM440.73mil.

The income distribution was based on the average monthly minimum balance held throughout ASM’s financial year.

KUALA LUMPUR: HwangDBS Investment Management Bhd (HwangDBS IM) sees recovery in US equities in the coming months and aims to capitalise on it now by launching a fund that tracks the Standard and Poor’s 500.

The S&P 500 Index was expected to recover by as early as the second half of this year on the back of economic stimulus measures, said HwangDBS IM chief executive officer and executive director Teng Chee Wai.

It is the most tracked index of American equities after the Dow Jones Industrial Average.

“The current market downturn should be seen as part and parcel of market cycles and, essentially, investing is certainly a long-term approach and should not be taken as a means to make a quick buck,” Teng told reporters at the launch of HwangDBS US Access 80, its first fund this year.

“The US Access 80 was mooted on the premise of capitalising on the bearish global sentiment to gain substantial headway into the S&P 500 at a highly attractive valuation,” he added.

“(S&P 500) comprises American stocks with the largest market capitalisation such as Coca-Cola, Wal-Mart and McDonald’s, that would, in boom time, cost investors an arm and a leg to own due to the premium they command,” he noted.

The US Access 80 is a mixed-asset, open-ended fund that aims to provide capital appreciation through exposure to the S&P 500 while endeavouring to preserve a minimum of 80% of the fund’s highest net asset value achieved, observed on a daily basis.

“The 20% growth aspect of the fund employs a dynamic and tactical allocation strategy to achieve derivative-type active asset exposure on the S&P 500 to ultimately deliver better-than-average results. This strategy allows progressive lock-in gains while raising the preservation limit,” Teng said.

“Investors today are looking for investments that guard them against the ravages of the financial crisis and by nature, we recognise the importance of avoiding investments in highly leveraged companies and complex derivatives,” he said.

HwangDBS IM aims to secure up to RM100mil in sales for the US Access 80 in the next six months.

Aimed at retail clients, the minimum initial investment for the fund is RM1,000.

It has an approved fund size of 300 million units retailing at RM1 each during the initial offer period.

According to Teng, HwangDBS IM will continue to launch more funds this year to boost its assets under management which stood at RM5.6bil at end-December.

A year earlier, its assets under management stood at RM6.1bil.

AmIslamic to double assets under mgmt

AmIslamic Fund Management Sdn Bhd, a new unit under the AmInvestment Bank Group, expects its Islamic assets to more than double over the next two years.

She said there were a lot of opportunities for customised Shariah-compliant investment solutions despite the global economic downturn.

"We have a dedicated team of Islamic specialists to provide customised Shariah-compliant investment solutions for institutional investors.

We are optimistic that we can easily more than double, the funds under management which are Islamic assets, within the next couple of years," she said at the media briefing on AmIslamic Funds Management here today.

Ready to get groomed for success? For more information on Groomers Connection Academy, please do not hesitate to call us at 03 7725 0711

We are a compilation of all the major newspapers in Malaysia, this site is your one stop resource for all unit trusts related news in Malaysia. We welcome you to bookmark this page, do visit often!

For advertising related queries, kindly contact us at malaysiaunittrusts@gmail.com

Will Malaysia be Strongly Hit by the Current World Financial Crisis?

In view of our current economy, will you still invest in unit trusts?

Which of the following will you likely invests in?

How do you reckon our Malaysia Economy is doing?